on June 5, 2014 in Artist Profile, Quilt National Artist, Quilts
One of the quilts showing in Quilt National 2013 at the San Jose Museum of Quilts & Textiles is the delightful Dragon Sushi: 9 of Pyrex Cups in the Kitchen Tarot by Susan Shie. This story is an excerpt from her website where Susan shares some of the inspirations for her piece. 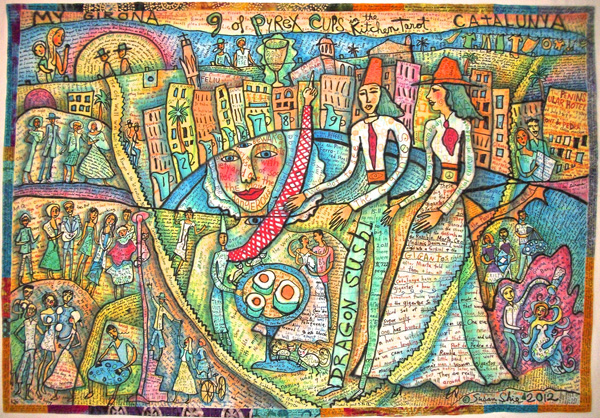 On June 14, 2012 I randomly drew the minor tarot card the 9 of Cups from the Sakki-Sakki Tarot deck (which is my favorite, besides the Kitchen Tarot). This card, described as the Wishing Card, would become my piece about my trip to Girona, Spain, a city north of Barcelona in the Catalan part of Spain, near the Costa Brava.

The piece chronicles my trip to the Interquilt 2012 show in Girona (where I had a solo exhibition and taught classes) and includes many of the wonderful people I met there. Girona was a wonderful experience, and I am in love with the city and cherish my time there and all the great people I met there.

I started painting on July 31, using my airbrush like I normally do. The piece was challenging because I wanted to include ALL the cool people I met in Girona and be able to tell stories about them. I painted the old part of the city, which has an amazingly rich mixture of cultures which took turns ruling this trade city over the centuries.

I worried that the piece could easily get too detailed and muddled, if I tried to write a lot, after all the little vignettes of groups of people that I put in. So I decided to make part of the writing with fabric markers in colors, instead of doing it all with my airpen and black fabric paint. This gave the piece a way of staying lighter and less mushy, but I also had to abbreviate my stories a lot. 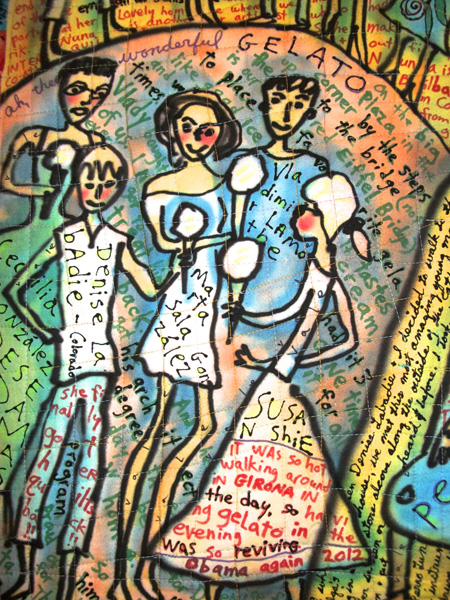 Detail of the quilt, including gelato

Gelato was my favorite food in Girona, because it was so hot, and we often carried heavy loads in all our walking. But my second favorite food there was from the Sushi Bar. Honest! It was in the big Plaza, and sitting inside, you could see the big Cathedral of Girona across the river, behind the beautiful tall, narrow houses that were built with nothing between them, and right up to the riverbanks, for a long way north and south along the pretty Onyar River.

I put the Cathedral and the big Church of St Feliu along the wall at the top of my piece, and I drew the Holy Grail there, too. I had joked that Girona felt so magical, maybe the Holy Grail was hidden there! Then, after I came home from Spain, I read a book by Patrice Chaplin, City of Secrets, all about the Holy Grail being there in Girona.

What’s in a name? 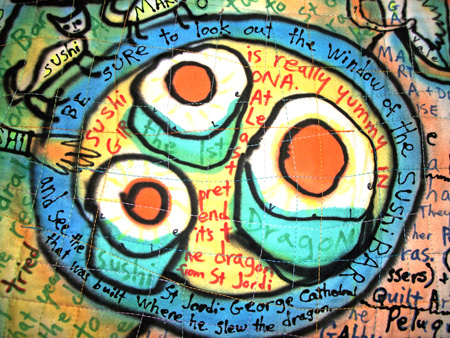 So, you wonder where I got the title for this piece Dragon Sushi, right? Well, in my free time, I made up a story to explain how come the Sushi Bar restaurant is lined up perfectly to see the Cathedral out of its windows. I had a vision: St George, aka Jordi in Catalan, slew the Dragon where the Cathedral is now, right there in Girona. Then, because he had all that dragon meat, he invented Sushi right there on the spot, and he had them build the Cathedral right where it all had happened, in honor of both slaying the dragon and inventing sushi. AND considering that this is the Year of the Dragon, my vision is very timely, as well! 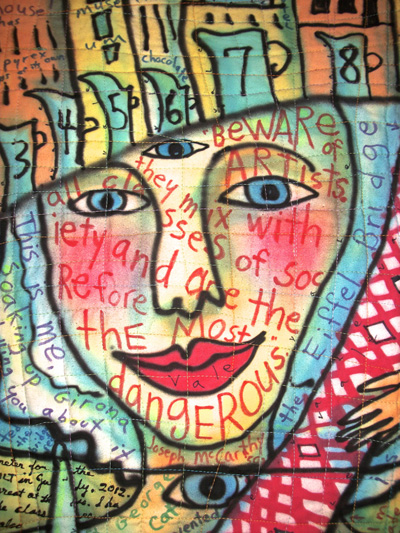 Detail: Susan Shie self portrait in her Dragon Sushi quilt.

There’s a large head of a woman beside the Eiffel Bridge arm of Xevi, and it’s MY head. On it I wrote a saying I saw on Facebook, a poster that quotes Sen. Joe McCarthy from the 1950s. It says:

Beware of artists, for they mix with all classes of society, and are therefore the most dangerous. – Sen. Joe McCarthy

I really like that. Too bad old Joe damaged and ruined so many Americans’ lives by accusing them of being Communist sympathizers and having them either banned from their careers or thrown into prison. I pray we never have that level of fanatic reactionism in our country again.

Most of the stories in this piece are about the Girona trip, with very little about current events, which I mostly squeezed into the writing on the border. I got the part about Todd Akin’s explanation about how we don’t need abortions for rape victims, because you probably can’t get pregnant from “legitimate rape.” And I included some Eva visit stuff and Hurricane Issac, which had flooded and taken the electric out of Haiti and Cuba, and after hitting lower Florida, was on its way to hit New Orleans, exactly 7 years after Hurricane Katrina. OH, and I write a little about the Republican Convention, like how there was a billboard there that said” Welcome to Tampa, where the mayor and all city council members are Democrats. Enjoy your stay!”

If you’d like to learn even more about the people I included in this piece, please visit my website. 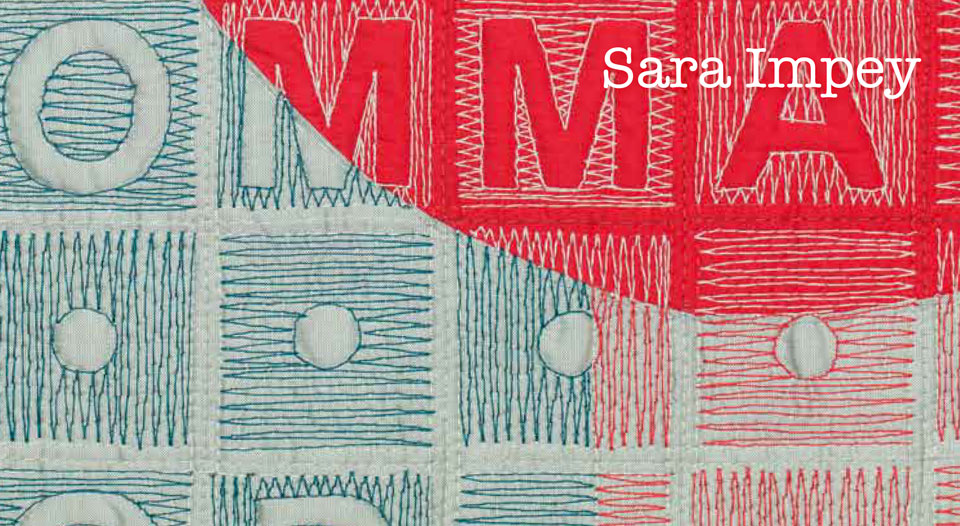 The book is a practical and inspirational book about the use of text in textile art, illustrated with work from some of the world’s leading textile artists. The publishers are Anova Books Company Limited.

Text in Textile Art is available now online in the UK from BookFellas, and will soon be available from Amazon.com in the U.S. You can pre-order Sara’s book from Amazon by following the links below.